The moment I stepped outside the airport in Ho Chi Minh City, I felt the thick, sweltering humidity of Vietnam. It’s not only the blazing heat that is peculiar to South East Asia, but also the spirit ablaze in the hearts of the people.

Today, Vietnam is a leader of economic growth amongst South East Asian nations, and boasts of a large, active, young generation. As of 2019, the country’s average age is about 30 years old (Central Intelligence Agency). Although gradually introducing a relatively-free democracy, Vietnam is still a socialistic state, and is often called a “Little China” due to it’s high speed of development.

Bicycles, which famously filled the streets just a few years ago, have been replaced with colorful motorbikes whizzing by, racing through intersections, and squeezing to the front of every traffic light interchange. As major construction projects like railways and high-rise buildings are underway throughout the city, streets are lined with modern and stylish coffee shops; boutiques resembling popular stores in California reside next to old, antique buildings, reminiscent of the 1980s.

Along the road, I found a particular pizza restaurant that is gathering great attention in the country right now. Pizza 4P’s offers the most amazing Neapolitan pizzas that are oven-baked, in an authentic hearth. Opening in 2011, they have been gathering global attention in features by the New York Times, BBC, and Forbes, capturing the hearts of millions with their delicious cuisine. Pizza 4P’s has now opened in 11 locations in throughout Hanoi and Ho Chi Minh City.

Pizza with homemade cheese produced in the suburbs of Vietnam, Dalat, flour imported from Italy and organic vegetables provided by local organic farmers has been highly reviewed and praised both home and abroad. They were even ranked as the number 1 restaurant in Vietnam by Trip Advisor at one point. They are known as a restaurant which guests cannot get a reservation, and that people flock to, not only from within the country, but also from all over the world.

However, the reason why Pizza 4P’s is gathering worldwide attention is not only because of their excellent taste, but because of their unique perspective on the dining experience. They often hold workshops on ”Edutainment” (Education + Entertainment) where guests can both learn and be entertained. They find ways to introduce hidden tricks for people to learn new things naturally, without even noticing it. All of this boils down to their core business philosophy, which has remained the same since their foundation: “Make the World Smile for Peace”.

Pizza 4P’s Xuan Thuy, which newly opened in 2019 as the 11th location, are conducting sustainable, eco-friendly, and diversified “Edutainment” programs. These programs range from utilizing aquaponics to grow both fish and vegetables at the same time, a vegetable and herbs garden maintained inside the restaurant, as well as a “food waste zero” with earthworms compost project. I had the pleasure to speak directly with Pizza 4P’s Founder & CEO, Yosuke Masuko and its COO, Sanae Takasugi.

Mr. Masuko: “I had appreciated the concept of “Edutainment” even before I founded the company. We opened a pizza restaurant in Ho Chi Minh in 2011 based on the idea that we will create a place where people can learn something new enjoyably through various experiences.”

Ms. Takasugi: “When we lived in Japan, we made a pizza hearth by ourselves and held a pizza party with some of our friends. Then, we discovered ourselves, like “How fast a pizza can be made” or “How delicious a pizza is if we bake by ourselves”.

Therefore, we opened Pizza 4P’s from the thoughts that the restaurant would not only offer delicious pizza backed in an authentic hearth which was rare those days in Vietnam but also offer a place where guests including kids can discover something new through dining.

In this new location, there is a farm garden inside and guests can experience picking up vegetables to eat there. We are very happy to hear that kids say that they didn’t know how vegetables grow or that they can eat what they pick up themselves even though the vegetable is that they don’t like.” 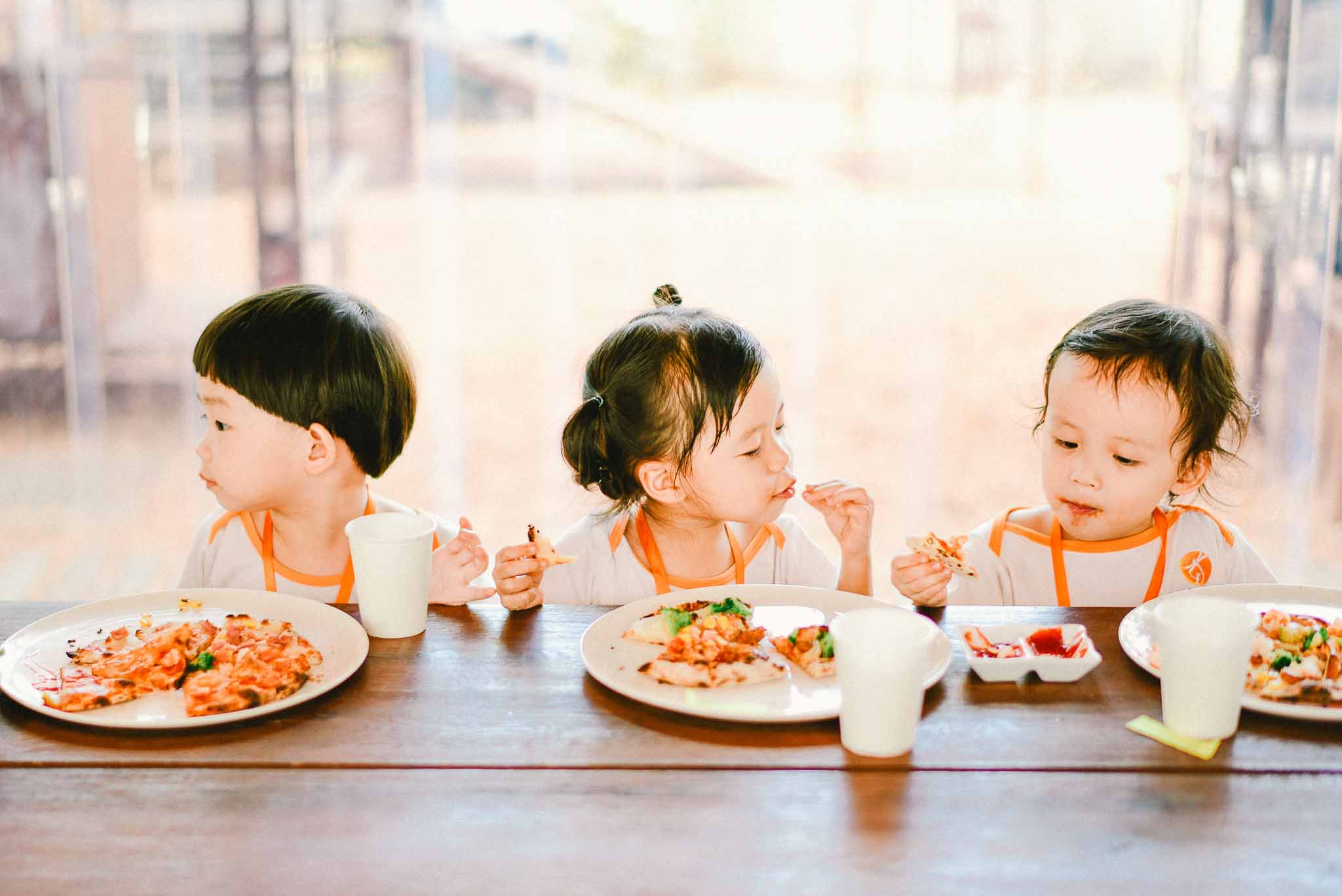 Aquaponics that grow both fish and vegetables at the same time
I interviewed Mr. Yuma Nagata who is in charge of their sustainable business development in Pizza 4P’s:

Mr. Nagata: “We have about 100 boxes of earthworm compost for this restaurant. Earthworms eat about 20kg of food wastes every day and we produce compost in this manner. As the amount of waste produced daily in the restaurant is about 20kg including vegetable skins and leftovers, that means we virtually realized zero-waste.

This restaurant has also introduced aquaponics that grow both fish and vegetables at the same time. Earthworms grown are fed to fish in the pond in front of the restaurant and fish droppings are filtered to take only nutrients to use for vegetables in the farm garden as a fertilizer. In addition, water which was used in the farm garden is recycled and put it back to the fish pond. As vegetables grown here are all used for dishes in the restaurant, we are also creating POPs for them so that guests know which vegetables are used for which dishes. 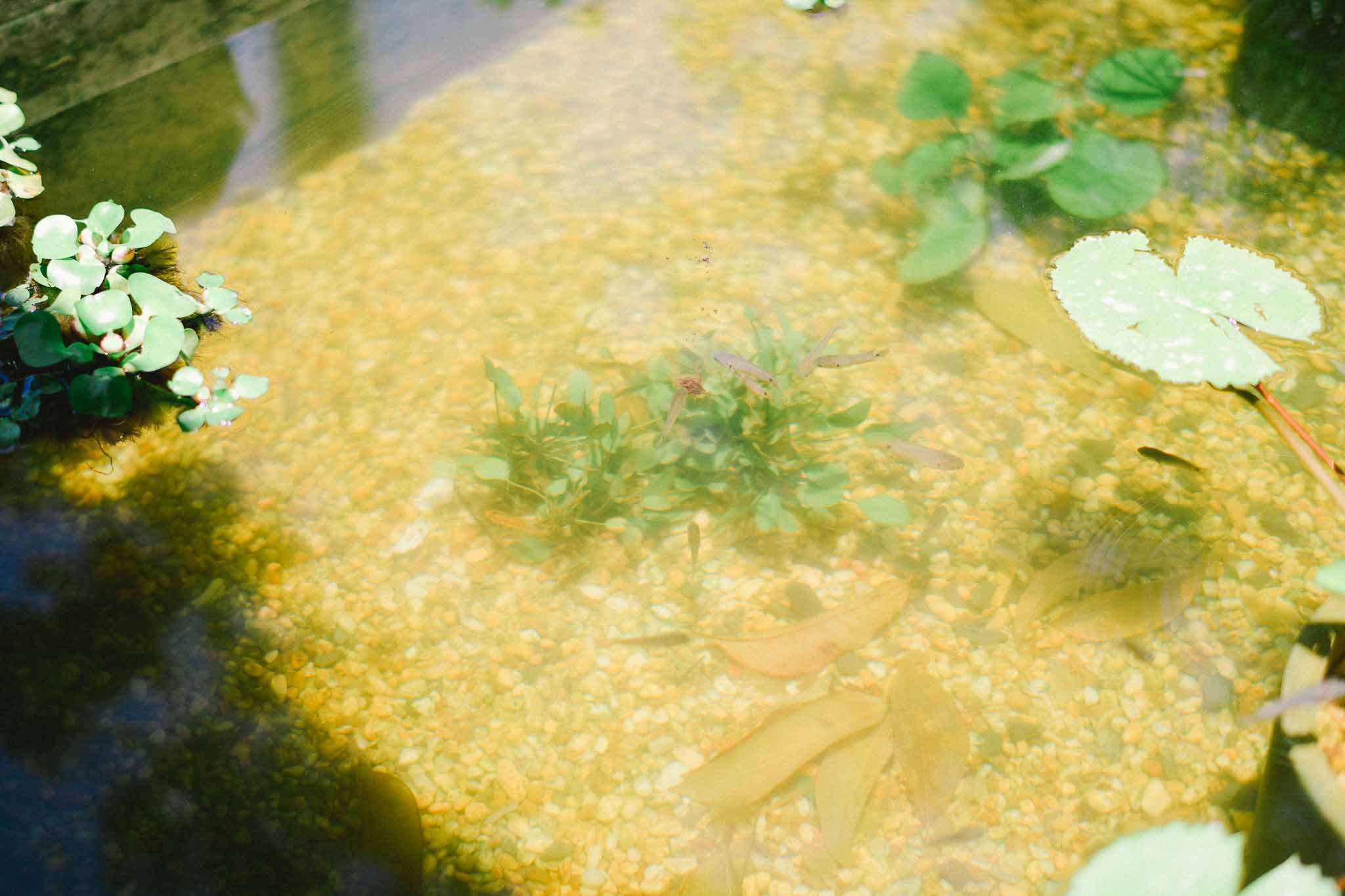 As for electricity, we’ve introduced solar system which is still rare in Vietnam so that we can cover all the electricity by ourselves. I hope those of our efforts will make guests show some interests in climate change.

We also make sustainable efforts in a factory where we make homemade cheese as well as the restaurant. Whey is a byproduct usually dumped away through the process of making cheese. We succeeded in using it as a fertilizer for organic vegetables after much experimentation with a university, a research institute and a farmer.

These efforts were also introduced for study in Harvard Business School.“ 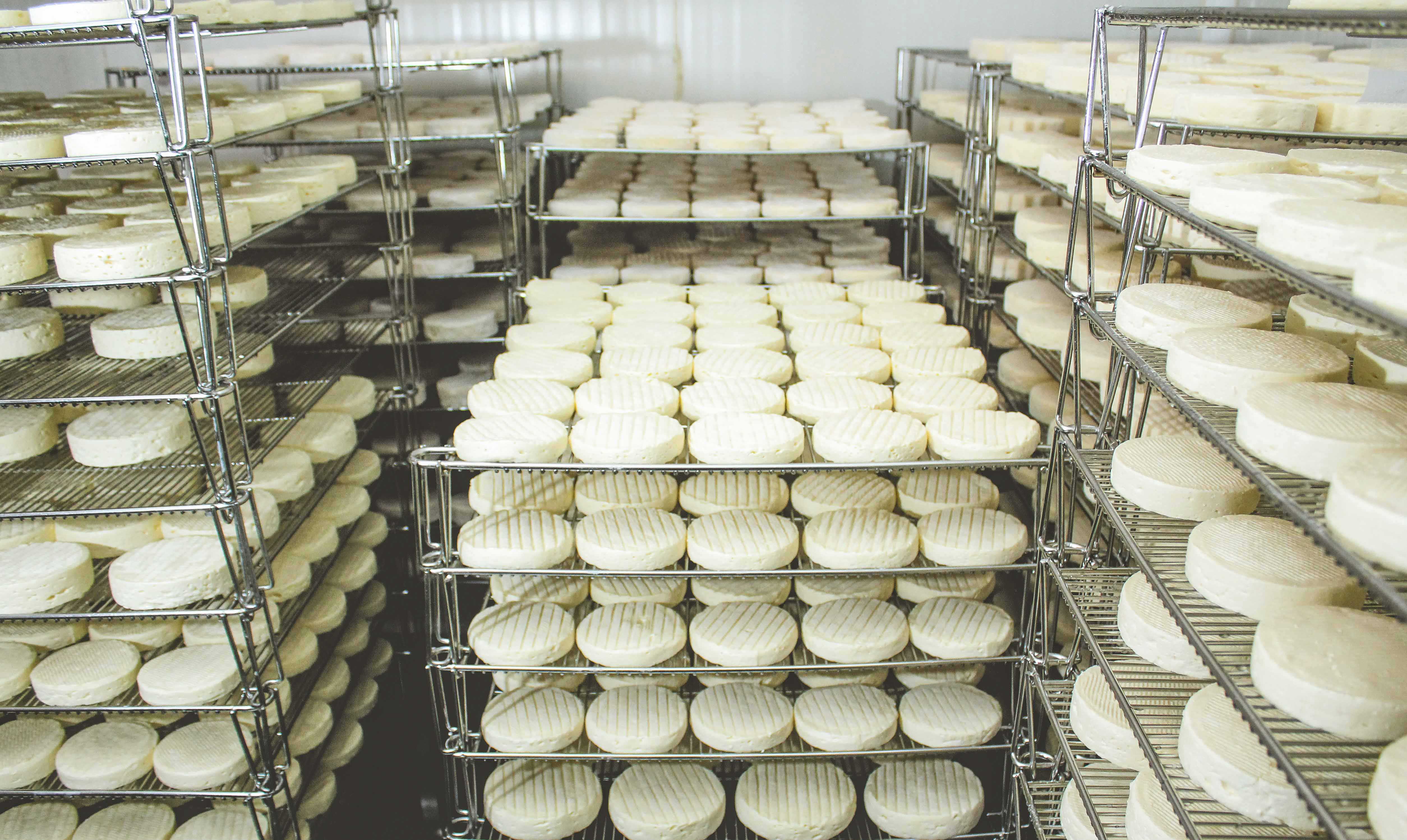 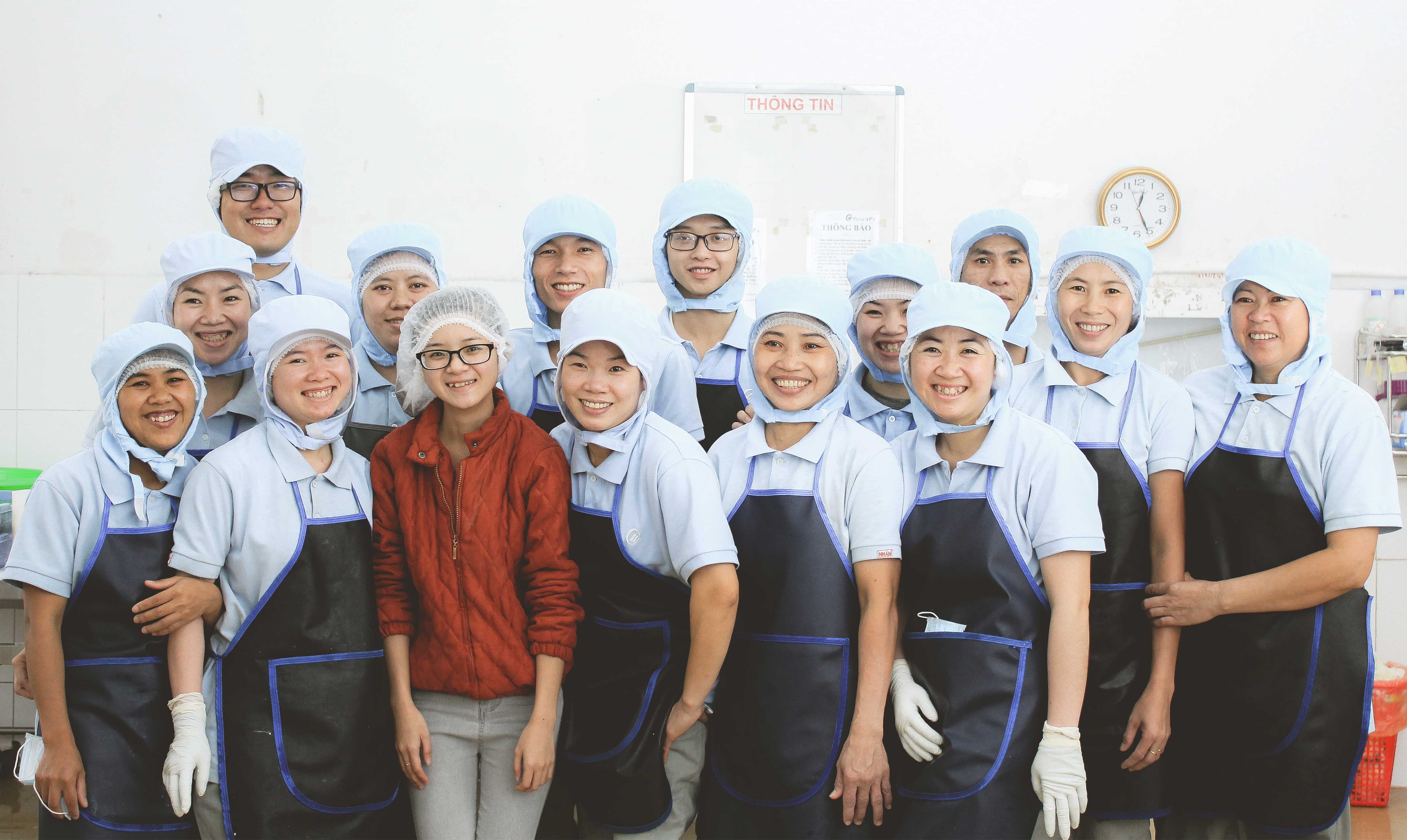 Advantages of growing vegetables in the restaurant’s garden

Mr. Nagata: “I think it is more sustainable to grow vegetables and herbs in our own farm garden than to bother to bring them from remote areas by airplane or truck. It makes us provide fresh vegetables which guests know who grew them and where they came from and reduce environmental burden from transportation. Also, vegetables often get damaged during being transported in general, which leads to food loss. Such a loss can be prevented if we grow them in our garden, which is also an advantage.” 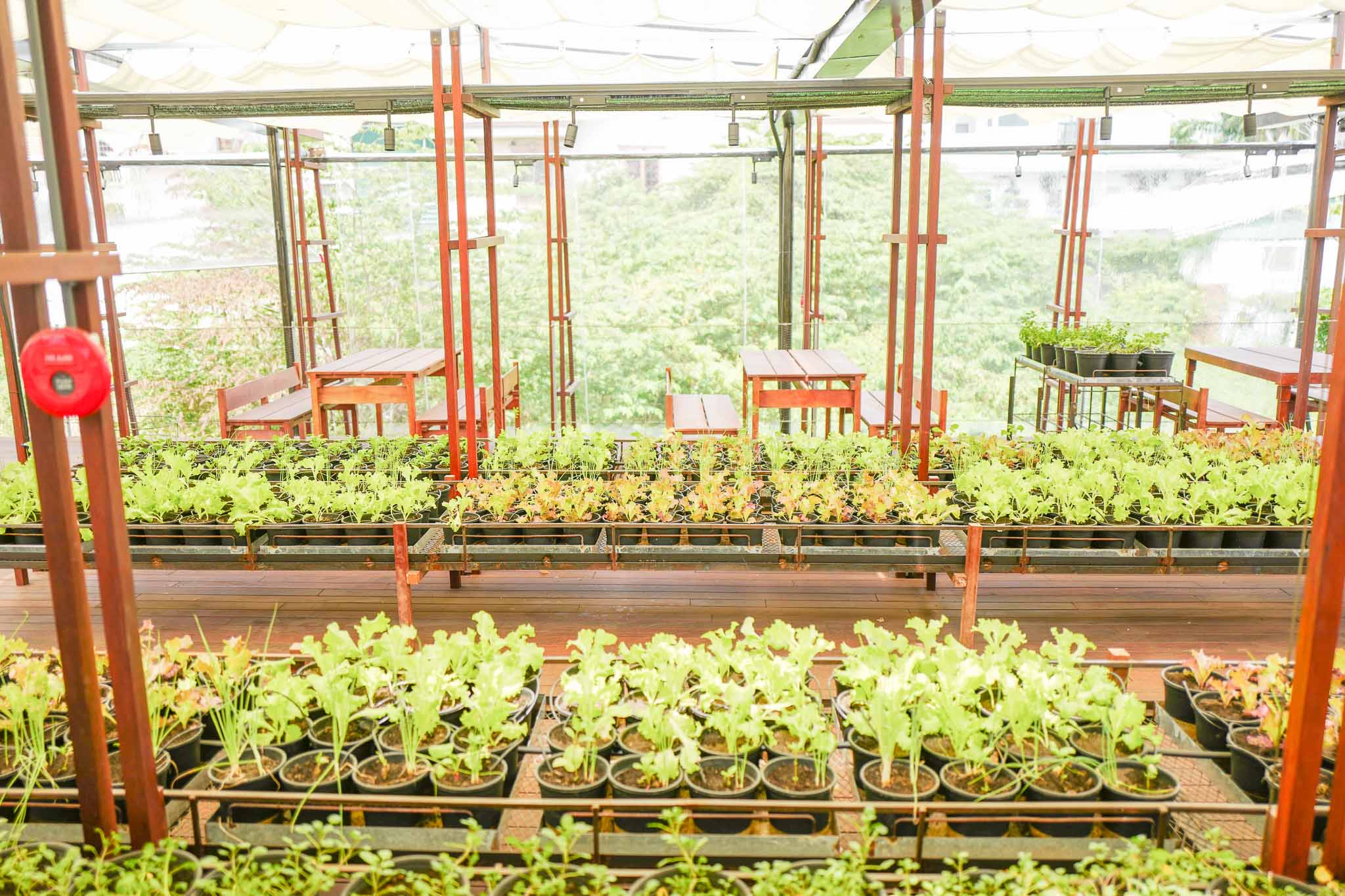 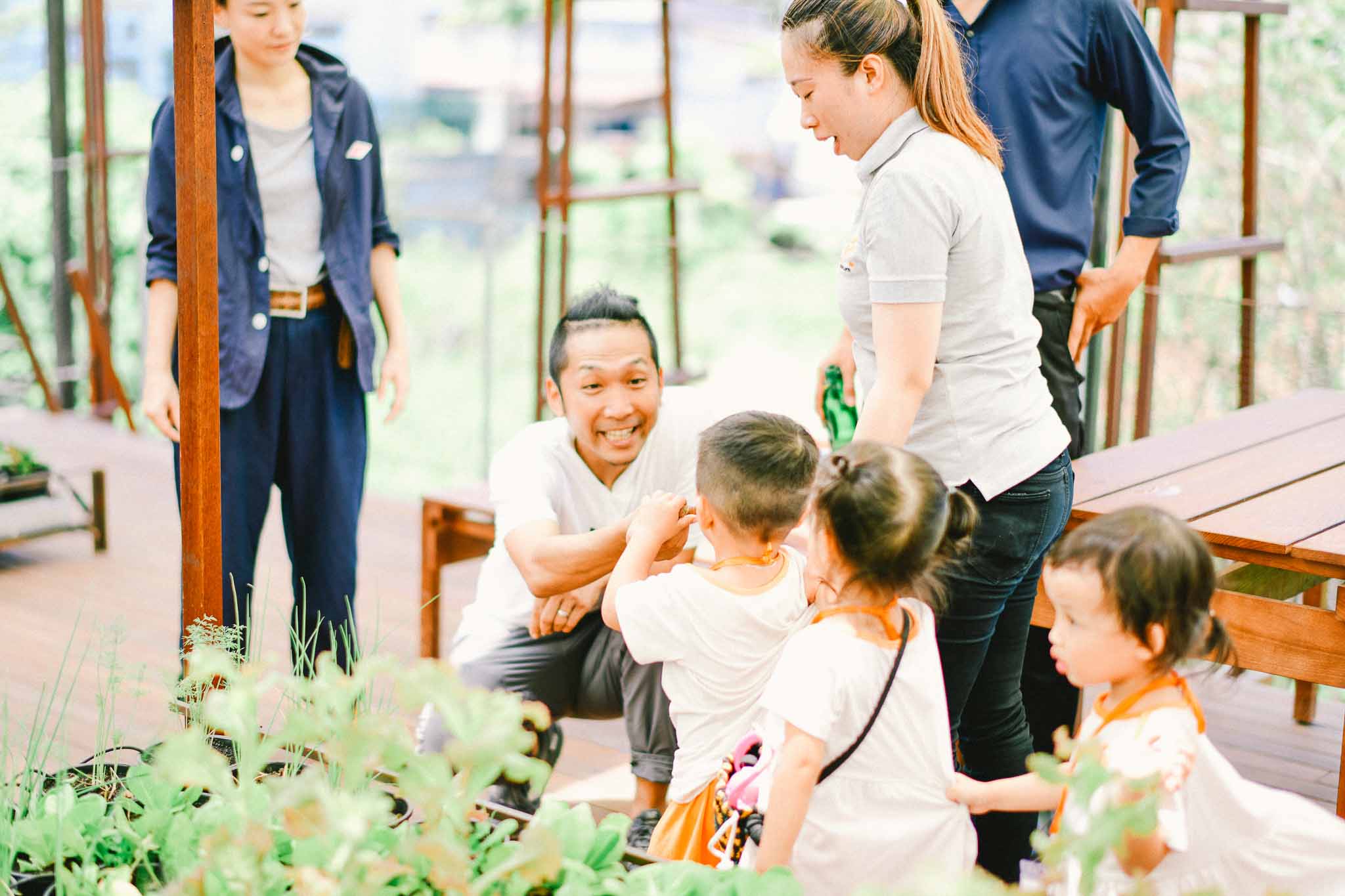 Pizza 4P’s efforts that guide Vietnamese future
Mr. Masuko: “Pizza 4P’s has done away with plastic straws and use stainless ones.

Vietnamese staff, then, asked “why are you shifting to stainless ones?” So, I said, “disposable plastic straws have caused air and sea pollutions of Vietnam and I want to make a change in the current situation.” I think they had showed interests in those issues somewhere in their hearts. They began to actively work with other efforts, too. Of course, it takes more than double efforts and costs, but, even so, I think it’s a good thing we’ve worked on the project.

When we introduced earthworm compost to reduce food loss, we explained “why we did such a thing” or “how we are actually able to do that” to staff of other locations and students who are interested in environmental issues. I think it is important to let people around us get interest and work on such sustainable efforts with everyone by sharing our own efforts.” 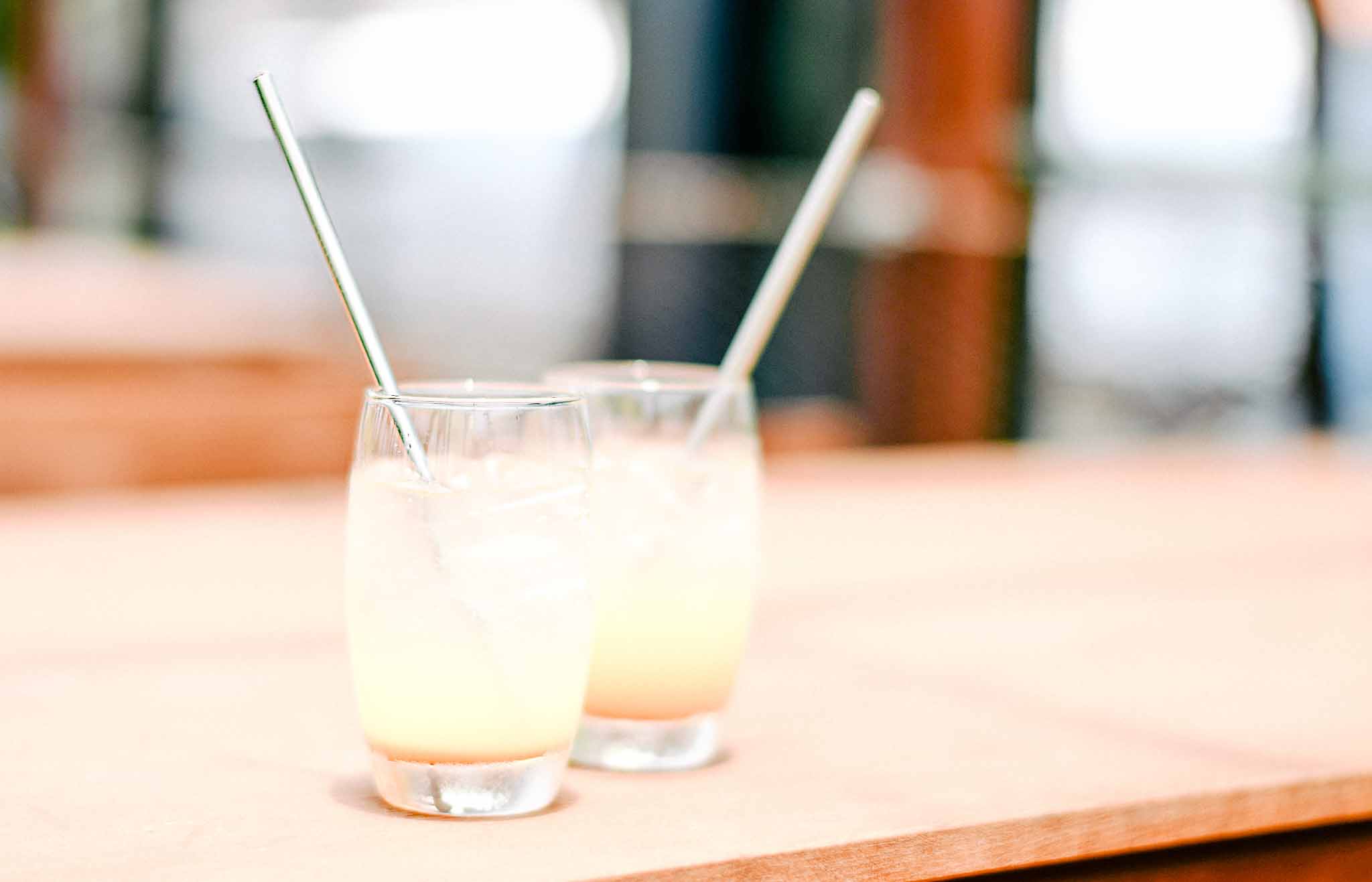 As Ms. Takasugi mentioned, what ‘Edutainment’ is aiming for is not something obtrusive, but learning by natural recognition. Pizza 4P’s appealing points are foundational deliciousness, graceful ambience, and a level of comfort within the restaurant that touches every guest’s heart. In contrast with the bustling, busy streets outside, once you enter the restaurant, it has a serene, tranquil, and relaxed feeling.

On the website and their social networks, they post pictures of appetizing dishes which appeal to everyone, and messages with a concept that attracts people to actually visit. They also have introduced Vietnamese traditional culture subtly through the interior of their restaurant. Pizza 4P’s is full of elements that let guests naturally show emotional connection to each story the restaurant presents.

The menu is full of uniquely characteristic dishes that incorporate food culture of Japan and Vietnam based on dough of authentic Neapolitan pizza.

Furthermore, their professional mindset to pursue excellent ingredients naturally lead to sustainable activities. Prior to this, there was no culture towards making cheese in Vietnam and people relied heavily on imports from Europe. Mr. Masuko and Ms. Takasugi wondered if they could make home-made cheese, and began acquiring manufacturing methods on their own.

Upon learning how to make cheese, they began visiting Vietnamese dairy farmers and teaching them what they had learned. Mr. Masuko and Ms. Takasugi are now business partners as a supplier of homemade cheese and ship their own brand products not only throughout Vietnam, but now internationally to Cambodia. As a result, they decreased the environmental load that resulted previously in the transportation of products via air from Europe, bringing significant profits to local producers. Furthermore, they have shortened transporting distance by procuring mainly local vegetables as much as possible, which leads to providing fresher food in the restaurant, and a better dinning experience for guests.

Future development which Pizza 4P’s is aiming at

Ms. Takasugi: “We’re moving ahead with the plan to newly establish a cheese factory in the highland called Dalat in the southern central Vietnam. This will be not only a cheese factory but also an Edutainment-type facility which has a dairy farm, a farm garden and a restaurant so that visitors can feel much closer to what they eat and have various experiences.

I think that would great if guests who had already visited our restaurant in the urban area of Ho Chi Minh and thought this pizza was delicious go all the way to the suburban Dalat where cheese is made and vegetables are grown, experience how agriculture and sustainability work in more natural environment and show more interests in natural environment and its affluence.”

Mr. Masuko: “I hope that the world will move to the better direction while people enjoy Edutainment, get more interested in food, agriculture and natural environment, and further spread the circle of sustainable efforts to the world. We will continue to make efforts to realize Pizza 4P’s philosophy ‘Make the World Smile for Peace’.” 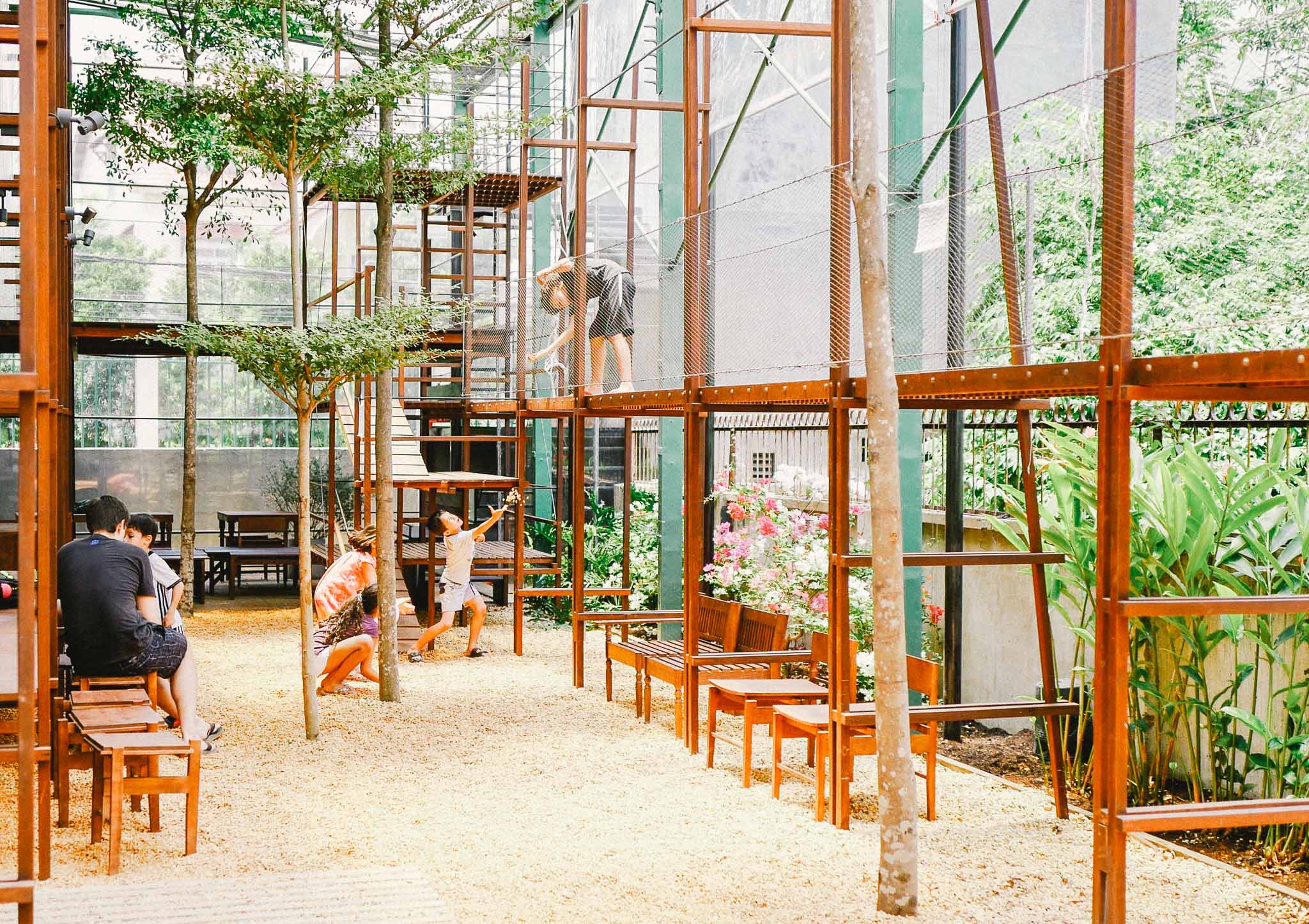 Have you heard the concept: “Leapfrogging phenomenon”? This refers to a nation regarded as “a developing country”, taking a leap, regardless of the unestablished infrastructure and systems, and becoming one of the most advanced societies on Earth. Something that may be an impossible risk for a more “advanced country”.

For example, Costa Rica established a renewable energy policy instead of relying on oil resources and more than 98% of national power consumption is already generated by renewable energy in the past 4 years. The country is now gaining attention as the nation closest to a 100% self-sufficient country with renewable energy.

Also, in Nepal, a national project to create a nation 100% organic is being conducted, led by a Japanese instructor of compost skills, Jun Kamoshida.

Vietnam has a peculiar topography which formed characteristic relation between humans and nature. It not only has mountains over 3000 meters above sea level such as Mt. Fansipan, but also faces the South China Sea which is rich in fish and shellfish. In addition, Vietnam has the fertile Mekong watershed where agriculture has been thriving since long ago. Even coffee and cacao are produced in many areas.

I believe the Vietnamese sustainable efforts, including activities of Pizza 4P’s, will lead the world with its passionate heat and dedicated spirit. The formulas “a developing country = a country being developed” and “an advanced country = a country that has advanced” are widely recognized, however, they do not necessarily apply to the field of sustainability. The world is paying attention to the this trend in Vietnam. With places like Pizza 4P’s, and people like Mr. Masuko, Ms. Takasugi, and Mr. Nagata, I am confident the world will continue to watch Vietnam grow. 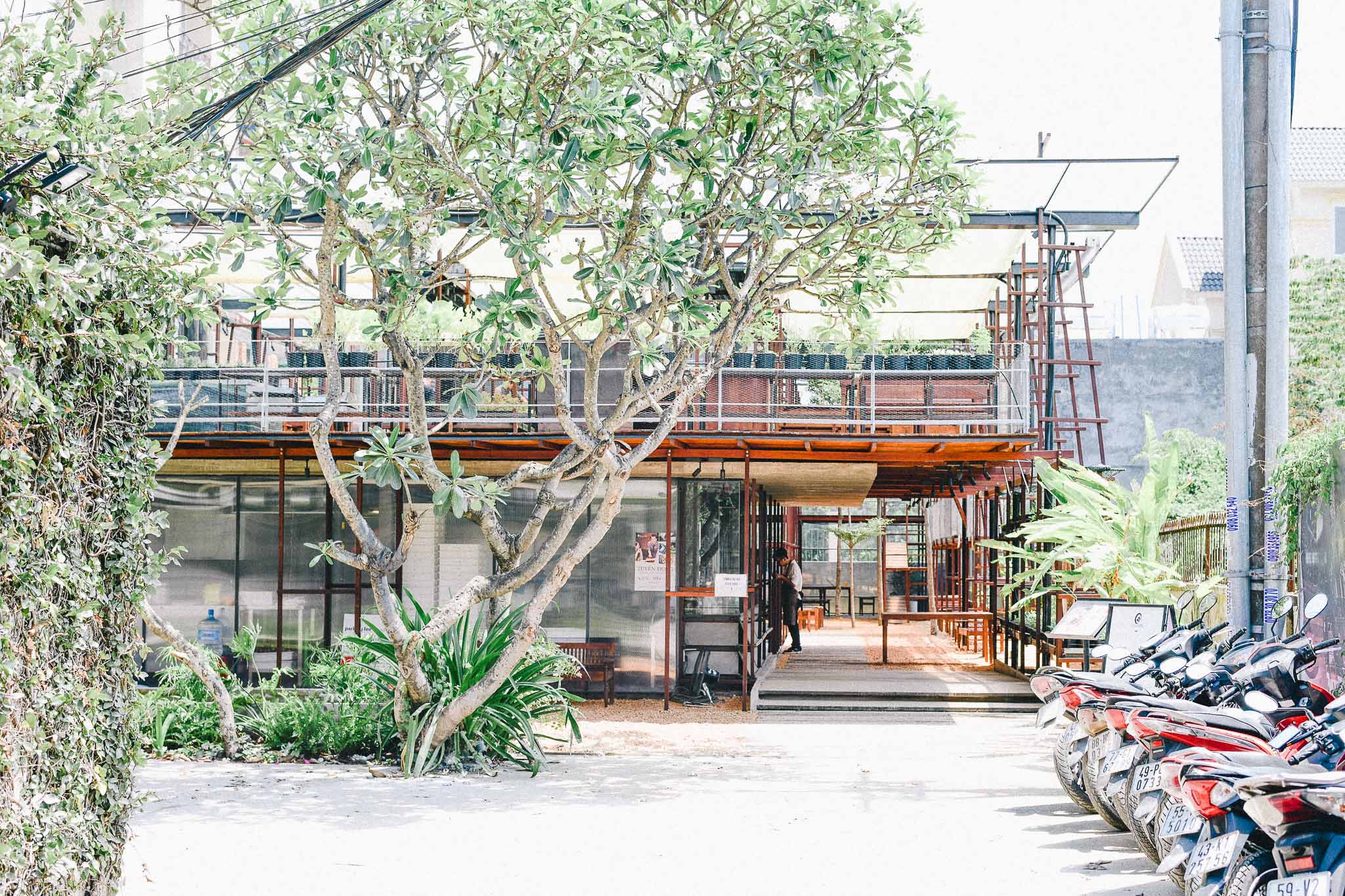